Here’s a quick post to recommend some tech that we’ve been enjoying. Punch Through Design’s LightBlue Bean is simply a delight. We’re using it to prototype an in-home IoT product (more on this in future posts) and so far the Beans have been really easy to work with. I won’t go into too much detail here because that purpose is better served by Alasdair Allen’s brilliantly comprehensive post from back in June. 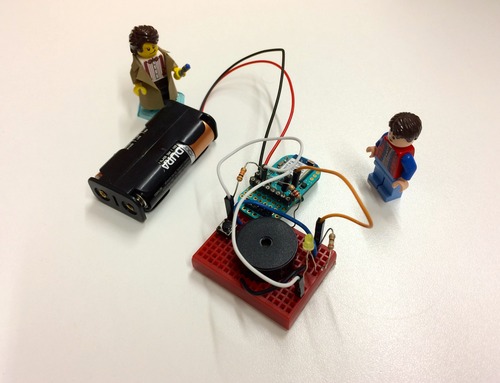 (The Bean is connected to the top of the red bread-board. Lego figures for scale)

The LightBlue Bean is totally wireless, which is pretty darn cool. The same low energy Bluetooth that makes it useful for IoT applications is used to upload your Arduino code to the Bean. That’s smart. It’s also got an accelerometer, thermometer and RGB LED on board as well as 6 digital I/O pins and 2 analogue pins for those of us who feel like we’re not tinkering properly without brandishing a soldering iron.

We’ve got a Raspberry Pi with a bluetooth dongle which communicates with a series of Beans via MQTT. Mosquito runs on the Pi as our friendly message broker and we have a proxy service that forwards the MQTT message payloads to the Beans via Bluetooth. While we’re playing around with the system this MQTT layer keeps things nice and loosely coupled.

The Bluetooth seems reasonably reliable and is good for a range of about 8 metres in our radio-noisy office. We did have some problems initially, but these actually turned out to be with the Pi’s handling of Bluetooth and installing the latest version of bluez helped here.

What I find interesting is the platform support for developing for the Beans. Until earlier this week if you didn’t have a Mac running Mavericks then you were out of luck. There’s now a shiny new Windows loader. As long as you’re running 8.1. Yet strangely the bean loader runs on iOS which “lets you program the LightBlue Bean wirelessly from your iPhone”. Maybe all these years I’ve been doing it wrong by using silly cumbersome laptops and desktops. Maybe everyone looking at their phones on the bus are really writing Arduino sketches. iOS support seems like a really bizarre priority. Does anybody really want to code IoT prototypes on their mobile devices? Answers on a tweet to the usual address.

I actually had to dig pretty deep into my cynicism repository to find something to complain about here. This is a lovely little product if you’ve got the kit to play with it. We’re going to be using it for lots of things for a long time to come.