As people who work with DNS, when we see a URL or domain mentioned on a TV show we are tempted to have a quick look to see if it exists (especially if it is a “.uk”).

So when, at 8:30pm on February 19th the BBC programme “Death in Paradise” had references to a domain “it’s-so-good.co.uk” our interest was piqued…

The first thing we noticed was that it was not actually a valid URL due to the apostrophe (which is not a legal character in a domain name). However, out of interest we had a look at the traffic and WHOIS data for the closest allowable version; “its-so-good.co.uk” (i.e. without the apostrophe).

The traffic for this domain over three weeks looks like this: 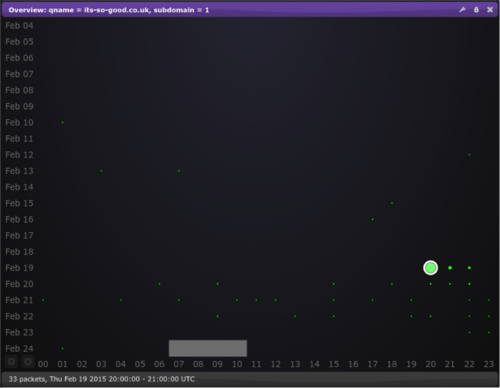 (Days on the y-axis, time of day on the x-axis)

So barely anything, then a short burst of interest (50 queries) followed by a quick return to almost no traffic. The domain itself was actually available at the time of the broadcast, only being registered at 10:30pm (after the traffic had returned to very low levels again).

Later in the same programme another domain was mentioned “it’s-so-bad.co.uk”. You can see where this is going… Is bad more interesting than good? Well it would seem that the answer is yes, but the interest doesn’t last any longer. Keep in mind this domain was not mentioned until later in the show, about 40 minutes in. The same traffic view looks like: 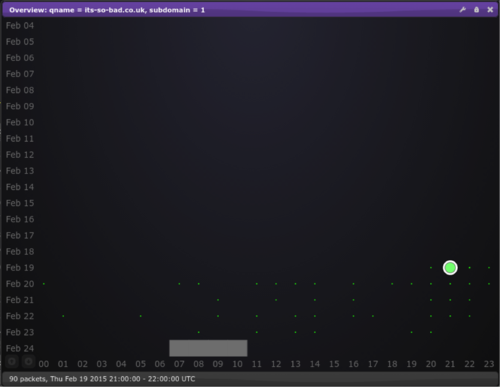 Now we see 90 queries,https://media.nominet.uk nearly double the number. If we look in more detail around that peak they happen almost as soon as the domain is mentioned (as near as we can tell). 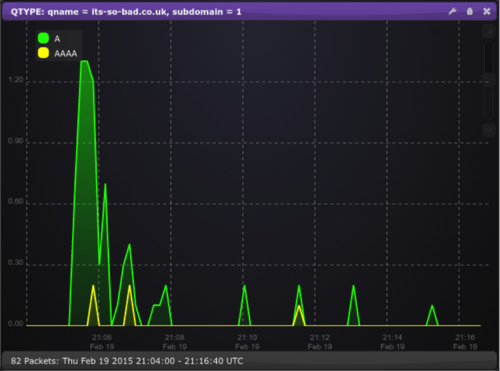 And as for registration? Again the domain was available as the broadcast began, but this time it was registered at 21:08:31. Still missing the burst in interest but a lot closer this time.

We’re not sure if we can explain why the second domain was apparently more attractive than the first; Maybe the contents as shown on the programme were just more interesting? The discrepancy in the registration times is also somewhat odd, perhaps no-one could believe that the name was still available so didn’t bother checking?

In all it just goes to show that even when we are relaxing and watching TV we are still thinking about work.